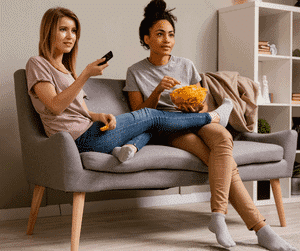 We all have those days when there seems to be no light at the end of the tunnel. When the world feels like it is crashing down on your shoulders, and you just want to curl up into a ball and cry, especially if you’re a working woman. There are plenty of ways to lift your mood, but you might be surprised by how much better you can feel simply by watching a movie.

Nothing is more satisfying than watching a good movie when you feel down. Escaping reality for an hour or two and diving into a story from the big screen is one of the best ways to get your spirits up and bring you back to life. This article will look at some of the best movies that can help lift your spirits!

If you feel down and out, The Big Sick is the movie you should watch. This romantic comedy was written by Emily Gordon and Kumail Nanjiani. It is a true story of how they met and fell in love.

The Big Sick is filled with comedy and tragedy at the same time. The movie is an inspiring story about love, relationships, and family. It is a coming-of-age movie about how the two fell in love in an interracial relationship where their parents were against it.

The Big Sick shows us how Gordon and Nanjiani’s relationship started, what happened to them, and how they overcame the problems that came their way. It is one of the best romantic movies to watch.

This movie will make you laugh, cry and fall in love with it—all thanks to the excellent screenplay and direction. This is one of the best movies of 2017, and it will make you feel better after watching it.

Fictional superheroes can influence our lives and help us discover our hidden potential. In Wonder Woman, the protagonist is forced to fight against the bad guys and her inner demons. This movie is not just another superhero movie—it shows how we can overcome obstacles in our lives and become better people.

Wonder Woman is a great flick that delivers on multiple levels and is worth watching in your free time. It’s a movie that will make you feel good about yourself and your life.

Hidden Figures will help you realize that nothing is impossible. The film tells the true story of three female African-American scientists who were instrumental in the U.S space program despite facing discrimination and segregation. They helped NASA send astronauts into space while overcoming racial and gender discrimination. The film hits all the right notes, and it may be a surprise to see just how relevant this film can be for anyone working in tech today.

The movie highlights a very important lesson that can be applied to our lives as women entrepreneurs and business owners. There’s always someone smarter than you, and you can learn from them. Don’t ever think that you know everything there is to know about your business or industry. Always strive for excellence and never stop learning.

Hidden Figures is a truly inspirational story that shows how one person can make a difference in the world. If you love history and inspirational stories, this is a movie you will want to put at the top of your list.

Star Wars VII: The Force Awakens is a perfect blend of old and new characters. It will touch your heart and make you feel good about yourself. The movie is about a group of ragtag freedom fighters trying to protect their home from an oppressive regime. It is a tale of love, loss, and redemption.

The movie has some great surprises for people of all ages. The plot is simple yet interesting, and it’s also easy to follow. There are no complicated twists that will keep you at the edge of your seat. All up, it’s a great movie to watch with your friends or family.

Get Out is a 2017 American horror film written, produced, edited and directed by Jordan Peele. It features Daniel Kaluuya as Chris Washington, a black man meeting his white girlfriend’s family for the first time. The film had its world premiere at the Sundance Film Festival on January 24, 2017, and was released in the United States on February 24, 2017.

The film tells the story of Chris Washington, who visits his white girlfriend’s family estate. He quickly learns that she may not be telling him everything that she knows about her family, as he is black. He wants to find out if they are racist.

The movie has several twists, and people love it because it’s funny and also scary at the same time. It’s a must-watch if you want to understand how racism works in modern times.

Sometimes it’s hard to know what movies you should watch when you’re feeling down. The movies on this list are sure to help cheer you up and give you some much-needed inspiration. If you need more tips for women entrepreneurs, read Hustle Mama Magazine’s best lifestyle magazines online or check out their magazine subscriptions for women for daily updates.

This blog’s author is a movie buff who watches movies every week and suggests movies for regular moviegoers.

How Has Gender Inequality Affected the Art World?