How Has Gender Inequality Affected the Art World? 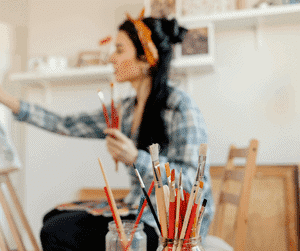 The art world frequently receives praise for being inclusive of all people, but the truth is that the art world has aspects that men dominate, just like other industries. According to a survey, 87 percent of paintings in the 18 major art museums across the US are male, and 85 percent of those are white. Not only are women less appreciated in the art community, but for every 55 cents they earn, their male colleagues earn a dollar. This means that male artists earn twice as much as female artists.

The New York Times reported that in 2019 only 11 percent of the paintings acquired by art museums in the US were made by female artists. The National Museum of Women in the Arts reported that male artists create over 96 percent of pieces sold at auctions, and in 2018, only five women made it on a list of 100 best-selling artists. The most expensive piece that a woman sold at this action was created by Georgia O’Keeffe, and the price of the piece was several million dollars lower than a piece that a man sold.

The representation of women in arts, or rather the lack thereof, is a global issue. Women are afforded fewer opportunities; their work is underappreciated and sold for a fraction of the price of a painting made by men. But what is the underlying reason that female paintings are less valued?

One of the most common arguments is that women paint differently than men. Not only does this argument devalues the art created by women, but it is also downright offensive to some. Given that some proof suggests that 54% of men and 53% of women choose painting as their medium, the experiments done to confirm the claim suggested otherwise.

In this experiment, volunteers were taken to a gallery and shown the artwork. They couldn’t physically distinguish if a painting was created by a man or a woman, which means that there aren’t any groundbreaking physical differences to the ordinary eye. People have suggested that perhaps men are better connected, or it might just be plain sexism. Either way, it is pretty apparent that there is still gender inequality in the art world, no matter how forward and inclusive they claim to be.

Today many painters such as Picasso, Da Vinci, and Van Gogh are celebrated for the masterpieces they created. However, one prominent issue we still struggle with is that no female painters in history have accumulated the same amount of respect male painters have or even a fraction of it. While it can be argued that perhaps women of the time weren’t into art or didn’t create art worth anything, how can it be possible that not one single woman in history was an artist?

The answer to this question lies in the famous essay by Linda Nochlin titled “Why have there been no great women artists?”. In this essay, she argues that the problem isn’t that women weren’t great painters back in the day. Still, rather they were almost indivisible in history because there was a lack of education and opportunities. The essay sparked a movement for rediscovering underappreciated female artists and the masterpieces they created, forcing the art world to realize the prevalent discrimination and sexism in its folds.

Throughout the centuries, female artists have gained some recognition. This has caused them to create unique pieces and challenge our understanding of identity, empowerment, gender, and expression. Out of the 20th century came pieces such as Tiptoe Through The Tulips (1969). Salut Tom (1979) and Twilight Awakening (1978) were created, and they forever changed the role of women in art as they became artists instead of the muse.

What Can Be Done?

Discrimination and sexism in the art world isn’t a new thing. In 1986, The Museums of Modern Art exhibited a large collection called The International Survey of Paintings and Sculpture, and only 13 out of the 169 artists were women. This incident led to the formation of the Guerrilla Girls, and they continue to fight to bring attention to female artists and their crafts and the domination of white males in the art industry.

The good thing is that people are still fighting for change. Women worldwide continue to champion gender equality in the art world, and things are changing. In 2017, Lisson Gallery opened in New York, and more than half of the artists they were showing were women. And few galleries have fought for the rights of female artists, such as Fiona Banner, Marlene Dumas, and Cornelia Parker.

Hustle Mama Magazine provides educational content to women all around the world and has gained the reputation of being one of the best online magazines. We not only provide content that will empower you but also provide you with tips on how you can be your best self.

So, contact us if you want a subscription to one of the best magazines available for women.

As a woman herself, the author knows being a female in this world is extremely hard, and almost all industries are male-dominated and gender-biased. In light of those issues, she provides content that will educate people about the inequalities and gender discrimination women experience and provide solutions to such problems.