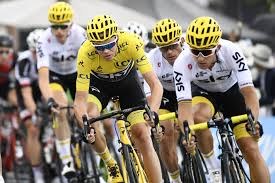 In 2012, we ticked one of the boxes on my husband, Barry’s, bucket list. We watched a stage of the Tour de France. Or rather, we watched a fraction of a stage. Barry had it all planned.We would park on the Col du Granier, at the peak of the climb, and we would get to see the riders go past slowly.We decided to do a reconnaissance on the day before.The only problem was, everyone else had the same idea and was already in place- lots of white vans with satellite dishes on top to receive the broadcast, and their owners reclining in their folding chairs on the verge of the road.

Our hearts sank, Barry’s particularly. In an attempt to retrieve the situation, I suggested that we drive on and check out other parts of the route, and we struck gold at Saint-Pierre-d’Entremont. This small village further on had plenty of parking and best of all, there was a right- angled corner where we could stand and get a good view of the riders as they slowed down. Phase one complete!

We arrived early the next day, parked, and set ourselves up on the corner. Only four hours until the riders came past! Others started to join us, and we got chatting. A lovely Dutch family came and set up next to us. Rob and Sylvia’s English was excellent, and their little girls, Mila and Esra, were just gorgeous. As we waited for the riders to come, we became friends.

Eventually the riders flashed past us, but by this time we had already arranged to have a coffee with our new friends after the race. When we finished our coffee (the girls had ice creams), Rob went to his van and returned with a bundle of clothing which he gave to Barry. ‘I want you to have these,’ he said, handing Barry a set of Lycra cycling gear. Barry tried to pay him for it but he refused. ‘Okay,’ Barry said, ‘but I’m going to send you a set when I get back home. Give me your address so I can post it.’

And that’s where it all began. We kept in touch, sent Australian themed presents for the girls at Christmas, and promised to come back to see them. And we did. In July this year we stayed in Maastricht, and, four years after our first meeting, we were reunited. What a happy day that was! We just didn’t stop talking and the girls, who haven’t yet learned English, made us beautiful pictures which we treasure. The friendship is stronger than ever, and we are already planning to return to Maastricht to see them again and this time, at their insistence, to stay with them. And all because we stood on a corner, in a little French village, and found common ground with a beautiful Dutch family. True serendipity.

Daily Tips to Manage Stress in a Relationship

The Importance of Sisterhood

Business Ideas for Women Looking for a Side Hustle