MANTEO, N.C., May 27, 2022 /PRNewswire/ — The Outer Banks Visitors Bureau invites the public to begin their discovery of the OBX barrier islands on Roanoke Island, where America’s story was set in motion more than four hundred years ago. Today, the tiny waterside town of Manteo provides travelers with a celebratory atmosphere, just right for those passionate about history, hospitality and the nearby national parks and refuges. “Whether you stayover the weekend or a full week and longer, Roanoke Island can be a destination on the OBX unto itself, or the perfect entry point to further explore the other Outer Banks islands,” says Lee Nettles, Executive Director. “Many people have heard of Roanoke Island from history books as the first English colony in America dating back to 1587, and here we are four centuries later, waving folks onto the islands to pursue their dream vacation.” 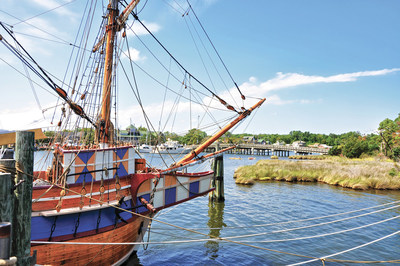 Roanoke Island is centrally located between the North Carolina mainland, the Northern Beaches and Hatteras Island, surrounded by the waters of Croatan and Roanoke Sounds, with the Atlantic Ocean just a few miles away. Manteo distinguishes itself as a community filled with bed and breakfasts and coastal inns for intimate accommodations and premium guest services. The gorgeous salt marsh landscape is punctuated by the perpetual evening glow of the Roanoke Marshes Lighthouse assisting sailboats of all sizes as they venture off the Intracoastal Waterway in search of seaside adventure. As a nod to the Outer Banks’ colonial past, the 16th century replica sailing ship Elizabeth II watches over the harbor and invites fans of history to learn about the earliest Atlantic Ocean crossings from her berth at Roanoke Island Festival Park. On summer nights, enjoy live theater under the stars at Fort Raleigh National Historic Site as The Lost Colony Outdoor Drama continues an 85-year legacy of depicting our nation’s first trials and triumphs.

Along with the island’s history of early European settlers, we also have an incredible African American heritage, where Black pioneers of personal freedom came to Roanoke Island during the Civil War. You can be inspired by the Freedmen’s Colony story and other contemporary narratives at cultural sites around Manteo. Pea Island Lifesaving Station, later a part of the US Coast Guard, was the first station manned exclusively by an African American crew beginning in the late 1800’s. The restored Pea Island Cookhouse Museum preserves the history of the station and the heroic deeds of the brave men who served there. “Roanoke Island has so many interesting layers of history that are completely unexpected,” explains Nettles. “For example, we have the oldest living cultivated grapevine in America, the Mother Vine, in our community. At 400-plus years old, it looks like it grew right out of a fairy tale.”

“Visitors come for the outdoors, the coastal charm and quiet calm of the waterside wilderness that is within easy reach year-round. You head in one direction out of Manteo and you’ve got Pea Island National Wildlife Refuge and its hundreds of bird species sightings, and in the other direction you have Alligator River National Wildlife Refuge with kayaking excursions, tram tours and a huge black bear population. That’s not your average beach trip!” Taste seekers can drop a virtual pin in Manteo for a variety of original, chef-owned restaurants featuring locally sourced seafood and a range of other fare from fine dining to street food. Imbibe crisp cocktails featuring our local rum distillery spirits or down taphouse brewed small batch beers to toast the occasion of your discovery of the Outer Banks. OuterBanks.org

About The Outer Banks

The Outer Banks Visitors Bureau is a public authority and the lead marketing and promotional agency for Dare County’s Outer Banks, a 100 mile stretch of barrier islands off the North Carolina coast. OuterBanks.org